Bow and Bay Window Designs for Your Home

Designed specifically to give the impression of extra area and an extension of a room, a bow window is actually a curved bay window. The bow window projects space beyond the area of the room providing a wider view of a street or garden.

The bow window is usually joined by stone arches to create a casement. These types of windows were very popular in the eighteenth century but are still as popular today.

As well as adding valuable natural light to any room, they were a design feature that was very necessary when gas light and candles were trying to do the job that we take for granted with modern electricity. This advantage would have been impossible with an ordinary flat walled window.

A bay window creates space outwards from the main building and built in the Gothic revival style of Victorian England, many countries have influence and designs of their own.

British colonial buildings in America took on a style of their own and define characteristics of bay windows in such cities as San Francisco and Washington DC. 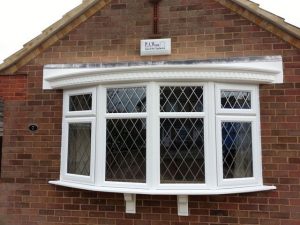 France and San Francisco have created the style from the traditional British bow and bay windows which are supported by the ground.

The Oriel window has no support and is usually in the next story up from the ground floor. Oriel windows also can have a balcony and the name in Anglo-Norman English means porch or gallery.

The Oriel window is commonly found in Gothic architecture and these windows need the support of corbels or brackets. These are made from stone and can be carved and elaborate. A gargoyle is not just a scary figure on an old balcony. This type of corbel is literally a water spout to help with drainage.

These windows are found to be built in conjunction with Tudor Arches. All these features are found on converted schools and churches into fantastic homes. Some of the buildings that have been renovated and not lost to the test of time can project turrets or little towers which reach up to the roofs.

Castles which are splendid hotels can have beautiful bay windows in the ground floor, bay windows on the upper floors and Tudor arches in turrets at the height of the building. This type of architecture is now a period gone by and all is done to preserve such spectacular features.

All of these windows are now made in UPVC and hardwood double glazed units. Some need to be triple glazed instead of the usual double glazed as they can be in positions that require added drought proofing or noise reduction.

The modern world is a different place from when these old buildings were created. Find out more about the latest designs at https://www.doubleglazingpriceguide.org.uk/

The Beautiful Bow and Bay Window